The founding of the school 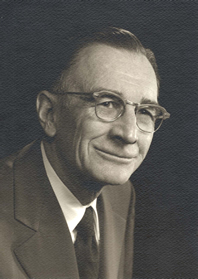 Leo Riethmayer, founder of the School of Public Affairs, set a high standard for scholarship and public service during his long and distinguished career.

Born in California, he earned his bachelor’s and master’s degrees in political science from Texas Tech University, and his doctoral degree from the University of Iowa in 1942. He served during World War II in the Office of the Secretary of War, joining the faculty of the University of Colorado at Boulder in 1946.

A year later, he became director of the Graduate Program in Public Administration, which later became the School of Public Affairs. He remained an active faculty member for more than 30 years.

Riethmayer also served as mayor of Boulder, a member of the Boulder City Council and the Boulder Planning Commission, district president of the Colorado Municipal League and a member emeritus of the National Defense Executive Reserve. He was on the Colorado State Commission on Judicial Qualifications, and over the years he drafted several pieces of legislation for the Colorado General Assembly.

Among his most notable contributions was a bill that was passed in 1953 to create the Legislative Council, a nonpartisan office providing research and analysis for legislators and legislative committees.

Riethmayer died in 2008. His extraordinary contributions are celebrated each year by the School of Public Affairs with the granting of the Riethmayer Award, which honors an outstanding public administrator in Colorado.

Milestones in the school's history