The 2019 legislative session in the Golden Dome: What can we expect? 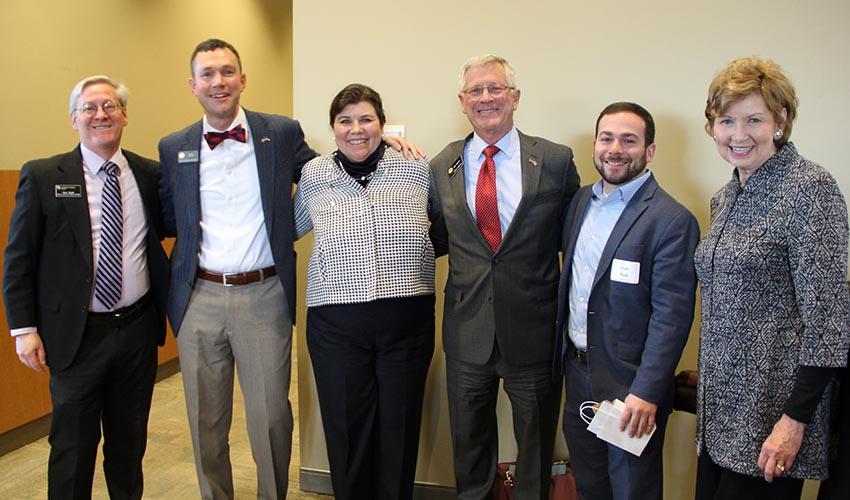 March 1, 2019 – DENVER, CO – CU Denver School of Public Affairs held its March First Friday Breakfast event themed on bills that legislators from both sides of the aisle are working to finalize during this 2019 legislative session.

The three-member panel, moderated by Tanya Mares Kelly-Bowry, vice president of Government Relations at the University of Colorado, consisted of Chris Hansen, Colorado State Representative (D) and member of the Joint Budget Committee (JBC); Jesse Paul, political journalist for the Colorado Sun, and Bob Rankin, Colorado State Senator (R) and member of the JBC. David Oppenheim, the legislative director for the Polis Administration was unable to attend.

With two of the joint budget committee members on the panel, Kelly-Bowry opened the discussion by asking about the committee’s role, dynamics and the issues facing both the JBC and the general assembly this year.

Sen. Rankin discussed the power of the JBC, highlighting that unlike many other states, the legislature controls the budget, and the JBC serves as the legislative arm of this function. This year’s six-person JBC is comprised of four democrats and two republicans, reflective of the democratic majority in both the House and the Senate. Established in 1959, the JBC is responsible for balancing the budget after holding hearing and reviewing requests submitted by state agencies, institutions and the executive branch.

Sen. Rankin shared that the JBC has two tracks this year: balancing the state budget and the introduction of a number of controversial bills during this session. Echoed by both Rep. Hansen and Paul, the controversial bills this year include topics like the national popular vote, the red flag gun bill, oil and gas, immigration, prison capacity, sex education and K-12 funding.

Kelly-Bowry then asked the panel to reflect on the new democratic majority in the legislature this year and how this might change the political landscape and influence legislation. Paul began by stating he believes a divided legislature is easier to gauge, and that with one party in control, more dynamics begin to emerge within both the majority and minority as legislators balance the need to support their party while also supporting individual policies and interests.

As controversial bills come across the legislature, Paul also sees lobbying groups, agencies and business groups taming opposition to the bills in an effort to make improvements and pass amendments before sending it through the Democratic majority in the Senate. Rep. Hansen further elaborated that a party majority in the legislature changes lobbying dynamics and increases client management as bills are introduced and discussed.

The panel moved on to discuss some of the largest bipartisan issues that legislators from both sides of the aisle are working to resolve during this legislative session. The conversation primarily focused on the subjects of K-12 and higher education funding, as well as full-day kindergarten, zero percent tuition increases and developing a budget formula that corresponds with the new higher education mission plan.

While each of these complex issues involves a number of ambitious goals, both parties are working hard to come to mutual agreements on how to move forward and help educators, school districts, parents and students face the challenges associated with these issues.

If you are interested in listening to the full conversation, an audio recording of this panel discussion is available online: https://soundcloud.com/user-354758604/2019-legislative-sessionmp3

University of Colorado Denver School of Public Affairs is creating the next generation of visionary leaders through its undergraduate and graduate programs in public affairs and criminal justice, taught by renown faculty whose expertise make them a go-to resource for state and national policy makers. The Master of Public Administration program is accredited by NASPAA, to global standard in public service education, and the school is ranked as the top public affairs school in Colorado and among the best in the nation.