School of Public Affairs hosts “Women in Leadership: A View from Governmental Agencies” 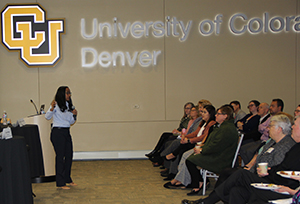 The University of Colorado Denver School of Public Affairs wrapped up the semester with its fourth First Friday Breakfast on December 6th, featuring an all-female panel of leaders within government agencies. Panelists included: Jennifer Hoffman, City Manager of the City and County of Broomfield; Angela Belden Martinez, Regional Director of the US Economic Development Administration; Patty Salazar, Executive Director of the Colorado Department of Regulatory Agencies (DORA); and Dionne Williams, Executive Director of the Office of Children’s Affairs for the City and County of Denver.

The panel was moderated by Dr. Sebawit Bishu, who is an assistant professor at the CU Denver School of Public Affairs and a research fellow for the Women and Public Policy Program at the Harvard Kennedy School. Dr. Bishu opened the event with a presentation about her research on women in government management, titled “Gendered Experiences of Women Administrators in ‘Male Roles.’” The aim of her research was to explore whether gender predicts city manager’s perceived level of work authority; whether city managers’ perceived level of work authority predicts pay; and how women’s experiences in the workforce are gendered. The key findings that she presented are that gender is associated with city managers’ perceived levels of work authority and pay, and that in public management, there is unequal opportunity for women in traditionally male roles.

Dr. Bishu then asked the panelists to share their personal reflections on their career and life trajectories, important moments, valuable experiences and core principles that culminated in their current leadership positions. A common thread throughout the panelists’ stories was summarized well by Patty Salazar. “If you had told me in five years I would be where I am, I would have laughed at you,” she said. Each of the panelists revealed how she began in one career and unexpectedly transitioned to another. When asked which factors contributed to their career trajectories, they cited the importance of internships, mentors, returning to school to earn a master of public administration—and serendipity.

The panelists then discussed the important moments or experiences that led to their current roles. Martinez remarked that her career was built on the back of taking risk, with the knowledge that her decisions might negatively affect her career. She also emphasized the importance of working hard and building relationships along the way, so that, eventually, many of those risks paid off.

Hoffman cited the importance of having a mentor who sees something in you that you don’t see in yourself.  She also encouraged the audience to embrace change, even if it means experiencing the discomfort caused by ambiguity.

Salazar added that women would benefit from “letting go of things that should be,” referring to norms based on gender roles, and that letting go can be extremely empowering for women.

Williams shared her “rules for life,” which include being honest and being oneself. She also emphasized the importance—especially for introverts—to speak up in any circumstance.

The closing comments of the panel were focused on the core values and principles that they, as women leaders, bring to their positions. They are: to not take things too personally; to be one’s authentic self; to put one’s best foot forward; and to come to know and understanding the public that one is serving. The picture these women painted as leaders is that everyone’s journey is different, sometimes difficult and uncalculated, but by being one’s authentic self, that journey will lead to exactly where one needs to be.

Follow the School of Public Affairs on SoundCloud and listen to the audio recording of the December 6 First Friday Breakfast. This month’s event catering was provided by Goddess Catering.