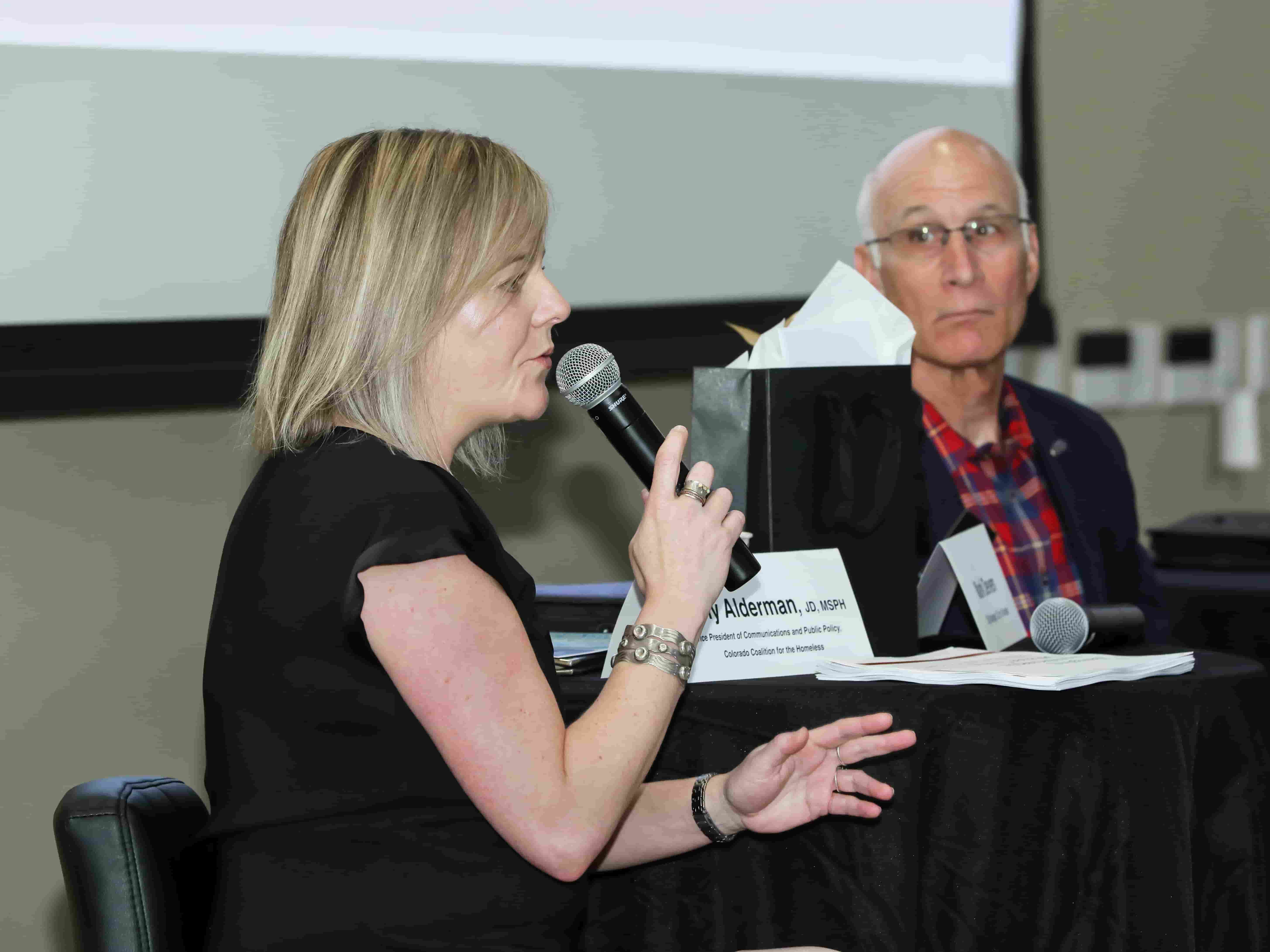 The University of Colorado Denver School of Public Affairs hosted its September First Friday Breakfast on September 6, 2019, as a kick off to the seven-event series for this academic year. The event brought together an expert panel to discuss ‘Homelessness in Metro Denver: Policy, Prevention and Regional Approaches.’ The three-member panel was moderated by Lisa VanRaemdonck, the Executive Director of the CU Denver School of Public Affairs Institute and featured Cathy Alderman, Vice President of Communications and Public Policy for Colorado Coalition for the Homeless; Mark Deven, City Manager for the City of Arvada; and Britta Fisher, Chief Housing Officer for the City and County of Denver.

Listen to an audio recording of the panel discussion.

VanRaemdonck initiated the conversation by inviting the panelists to describe innovative projects they have been working on to manage the challenge of homelessness. Alderman described how the Colorado Coalition for the Homeless is always looking for “ways to serve a population that has largely been left behind.” One of the initiatives she referenced is the social impact bond, which thus far has housed 325 individuals since its implementation, which, in turn, has led to cost savings and the provision of a stable network of support for the individuals and their families. Deven elaborated on the use of winter shelters and warming sites for people experiencing homelessness. He also stated that having a ground-level, “face-to-face” approach to interacting with the homeless community has helped his team to empathize with their experiences. Fisher wrapped up the question by discussing her focus on updating shelters and creating a residential shelter system to provide stability and to provide a place where homeless individuals can store their belongings. She also detailed hopes of creating a peer navigation system so that individuals who have overcome the challenges of homelessness can help others who are still facing those very challenges.

The panelists were then asked about which regions or cities have been inspirational in their approaches to dealing with homelessness and whether those same approaches could be implemented in the metro Denver area. Fisher described how Denver belongs to the High Cost Cities Housing Forum and looks to fellow cohort cities to share resources. Deven’s inspiration comes from the processes in place in San Antonio, Texas, in regards to veteran homelessness. He described how the city’s integration models are “aggressive and robust,” and have done a great job of reducing veteran homelessness. Lastly, Alderman spoke about models, such as Housing First, stating that housing is the first step to getting people stabilized and back into the community, and spoke about her observations about progress in Eugene, Oregon.

The panel then discussed unique partnerships that are succeeding in tackling homelessness, such as: employer assisted housing, Live Denver, allocation of unused rooms as a way of assisted living (Sunshine Home Share Colorado) and the incorporation of systems that strive to provide more housing for the homeless community in general.

An underlying theme to the discussion was the lack of involvement from higher levels of government, especially the federal government. Alderman stated earlier in the conversation that she found it, “fascinating the state doesn’t have a homelessness strategy,” and described that this issue involves regions outside of Denver. She also offered a question for the audience to ponder: “How do we move elected officials at the state level to come up with a comprehensive strategy and funding source,” pertaining to this issue of homelessness? Fisher closed the panelist discussion by stating that the fact of the matter is the lack of funding and a disinvestment in federal housing has contributed to this issue. She firmly states, “If we don’t get some serious dollars at the federal level, we’ll continue to talk about little innovations and helping people here and there, but the broadest scale really comes from our federal policy.”

The catering for the event was provided by Goddess Catering, and leftover food was donated to the Denver Rescue Mission. Additionally, the School of Public Affairs invited attendees to bring donated goods that were given to the CU Denver Food Pantry to support students experiencing hunger.

The University of Colorado Denver School of Public Affairs prepares the next generation of leaders in the public, nonprofit and criminal justice sectors, and shares knowledge and expertise to improve the quality of life in Colorado. The First Friday Breakfast series furthers this goal through monthly gatherings of experts and community leaders to discuss the most pressing public affairs topics facing the Denver metro area and the state of Colorado.