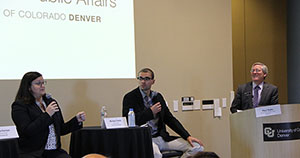 CU Denver School of Public Affairs hosted its third First Friday Breakfast of the semester on November 8th. Breaking from tradition, the event was held on the second Friday of the month in order to provide the public with time to digest the results of the 2019 Colorado elections, held on November 5, and to convene a balanced discussion between three expert panelists.

Topics of focus for the discussion included noted themes from the elections, voter turnout, analyses of Propositions CC and DD, and what the public might expect from future elections.

Sondermann offered his thoughts on the common election themes, stating that Republicans continue to struggle in the suburbs and that he was surprised by the voter margins for the different propositions. Hanson commented that there were financial victories across the local level and that we continue to see that people, “like to see their money stay closer to home,” in reference to the TABOR tax. Fields cautioned that off-year elections don’t necessarily reflect the national voter climate.

The consensus among panelists was that the failure was due to the timing of Colorado’s elections during this election year, confusion concerning the language of what the measure entailed, and an agreement that the majority of voters wants to reclaim any tax overpayments rather than permit the government to retain the surplus. According to Hanson, this won’t be the last time we will see this issue of eliminating the revenue cap, or “de-Brucing” as it is commonly known in Colorado, come up during elections.

The panel then offered some closing insight into the 2020 primary election. With the Presidential race and the race for the Senate between Corey Gardner and John Hickenlooper, panelists predict an exciting year to come. Putting it plainly, Sondermann said that, “anyone who expects 2020 to be a straight line is in for a rude awakening,” touching on the unpredictability of elections based on the outcomes of the previous years.

Follow the School of Public Affairs on SoundCloud and listen to the audio recording of the November 8 First Friday Breakfast. This month’s event catering was provided by Alma Catering.