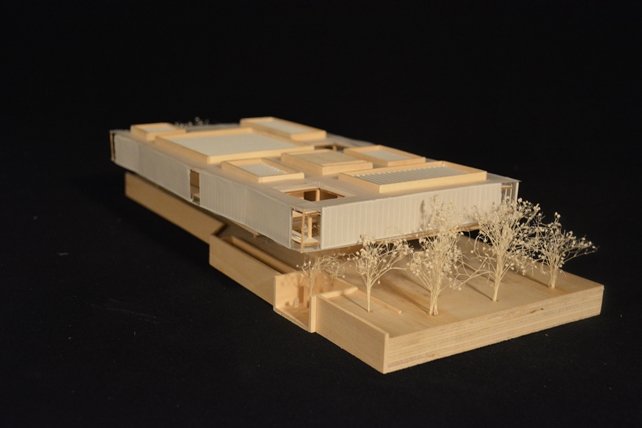 This gallery building was designed to house the work of sculptor Robert Morris, one of the central figures in Minimalism. His sculptures — often composed of repeated geometric forms — force viewers to consider composition and scale as they move around the work. Morris’ ideas were incorporated into the design of this gallery. Pure forms, rhythm, repetition, and scale impact visitors’ interaction with their spacial environment from the moment they enter the site.

The building consists of a gridded set of masses reflecting the modularity and order of the site’s context. These masses are staggered, and direct lines of circulation are broken. This creates a sense of wonderment and discovery as the user moves through the galleries. A mass is added to enclose the circulation space. In return, this becomes an interface between the city and the galleries.

The galleries and circulation space are elevated, allowing the two main access points of the site to connect. It also enables the ground level to be used as a public space. Outdoor galleries are dropped into the public space, relaying the concept of art as a gift to the public. Voids are carved into the building’s upper levels, which results in visual connections through all levels — from ground plane to the galleries above.